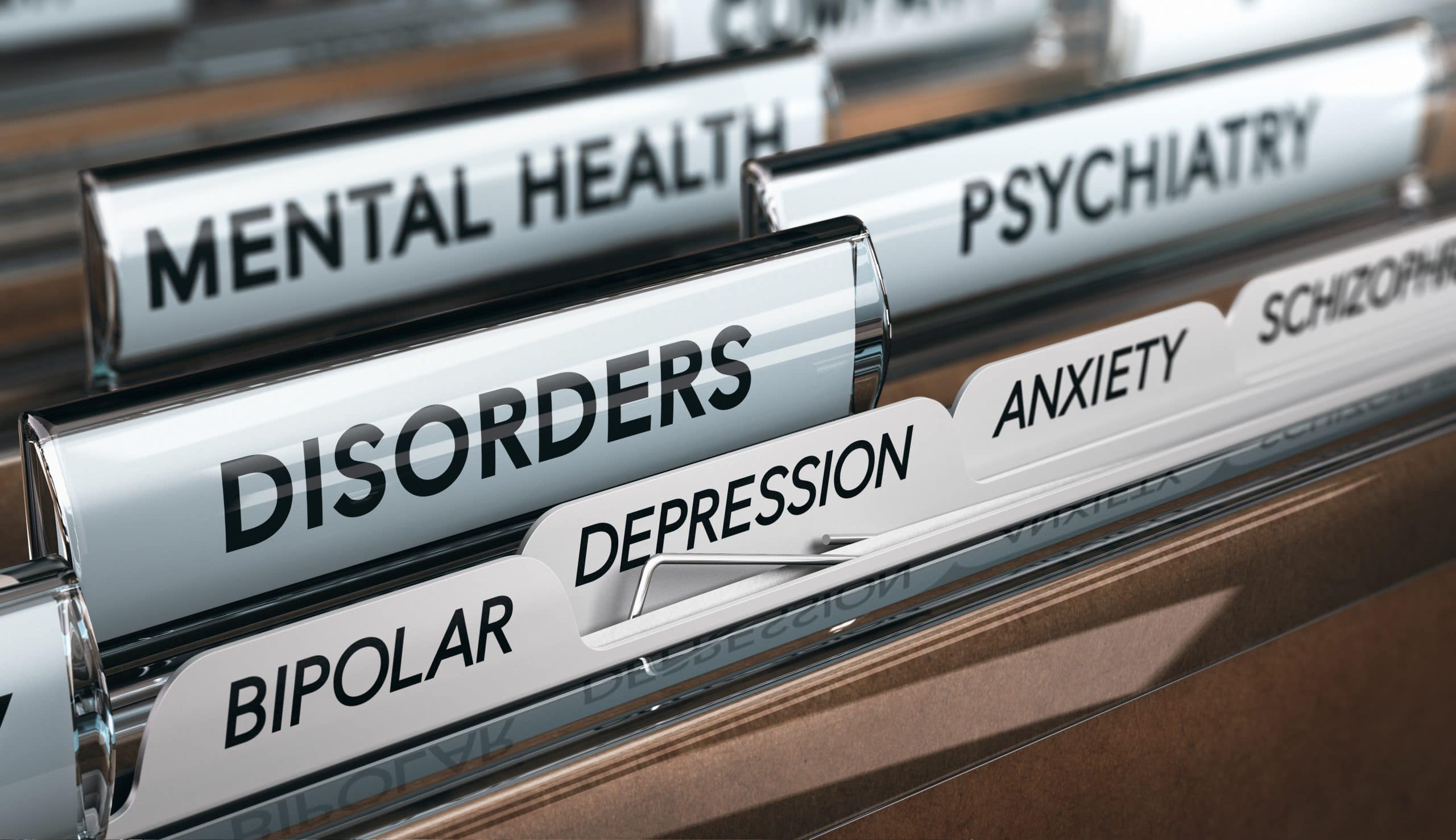 Today, it is widely accepted and supported by major scientific institutions such as The National Institute on Drug Abuse (NIDA) and the American Psychiatric Association (APA), that addiction can be classified as a form of mental illness. However, because addiction is a disease comprising both psychological and physical characteristics, it cannot be solely defined as one.

Within the DSM-V (Diagnostic and Statistical Manual of Mental Disorders), the criteria for addiction and mental disorders, such as anxiety and depression is the same, categorizing them as substance use disorders (SUD). When these conditions coincide, this is known as a dual diagnosis or co-occurring disorder.

The National Institute of Mental Health (NIMH) and The National Alliance on Mental Illness (NAMI) define mental illness as a condition that greatly alters a person’s mood, feelings, and thinking patterns. Thus, hindering one’s ability to function properly throughout the day, and maintain relationships with others, including co-workers, friends, and family.

People who struggle with drug and alcohol addiction also commonly experience radical changes in their behaviors, perceptions, desires, and priorities, interfering with all aspects of their lives, including relationships, work, schooling, and completing everyday tasks.

Therefore, it is evident that the relationship between mental illness and addiction is both symbiotic yet complex. The question is how are they related, and does one cause the other, or both?

The addiction specialists at Granite Mountain Behavioral Healthcare in Prescott Valley, AZ, help millions of people suffering from mental illness and addiction, recover and take back control over their lives.

History of Mental Illness and Addiction

Dating back to the 1930s, the main belief was that people became addicted to drugs and alcohol, because of choice and lack of willpower. The most important revelation is that substance abuse was considered a moral failure, not a mental illness.

Therefore, because addiction was not viewed as a disease like it is today, treatment such as 12-step programs at a rehab facility was not seen as an option.

Individuals who had substance use disorders were seen as corrupt criminals and treated as such. People with mental illness were categorized as menaces, and therefore, highly discriminated against and isolated from society. 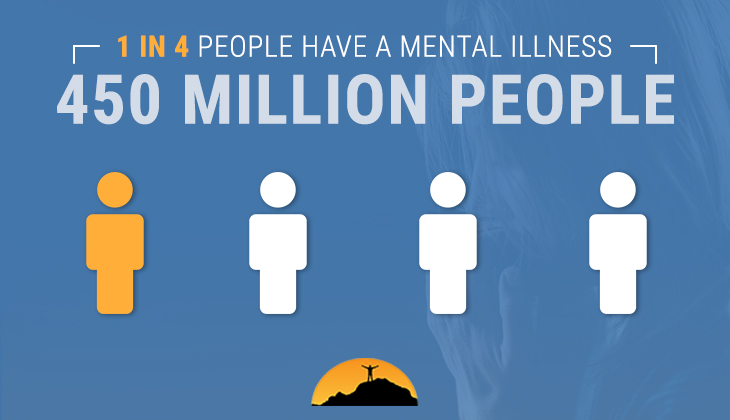 The Relationship Between Addiction and Mental Illness

Research has continued to indicate that co-occurring disorders, two brain disorders occurring in an individual simultaneously, are extremely common. The relationship between substance use and mental illness began back in the 1980s, where there was a high prevalence of dual diagnoses.

Mental illness is a huge risk factor and contributor to substance abuse. Many factors influence the probability of addiction. These include:

Compared to the rest of the population, individuals with addiction are twice as likely to also suffer from mental illness. Vice versa, for those who have one of the common mental conditions, it is twice as likely that they will become dependent and addicted to their substance of choice.

Oftentimes, people suffering from mental illness are completely unaware that they even have one. It is very common for underlying illness to be misdiagnosed or left untreated because symptoms do not always show up immediately.

That is why the intake process during detox before beginning treatment is so important. During the psychological evaluation, the admissions team aims to gather as much detailed information about one’s medical history and history of mental illness. If successful, any underlying issues and mental illness will be spotted. This helps medical professionals make more accurate and efficient diagnoses.

The treatment of co-occurring disorders has become in high demand, as approximately 450 million people (1 in 4) are affected by some type of mental illness.

Roughly 50 percent of individuals with severe mental disorders are also affected by substance abuse, according to the American Medical Association (AMA). Both the substance use disorder and mental disorder will be treated at the same time to ensure optimal recovery.

How Addiction Changes the Brain

Way back when the debate on why addiction was not considered a mental illness was purely on that people can quit using drugs and alcohol if they choose to. However, like other chronic illnesses such as cancer and diabetes, no one chose to develop these diseases, nor can they choose to stop them.

People do not realize that the same notion goes for addiction. What is not considered or often thought about, is that this disease does not discriminate. It alters an individual’s brain chemistry, structure, and function, which further exacerbates the illness.

Drugs and alcohol stimulate the brain’s reward center, inciting the release of chemicals called neurotransmitters. When these substances are consumed, most commonly, dopamine is released, producing short-term feelings of euphoria and pleasure.

Due to the brain and body recognizing these side-effects of a sense of joy and fulfillment, this fosters someone’s motivation to repeatedly engage in these risky addictive behaviors, such as binge drinking or taking drugs.

Research states that only when substances are abused, our brains can release up to approximately ten times the amount of dopamine. This rush of feel-good chemicals keeps compelling a person to use, and as a result, fairly quickly, the brain begins to adjust to the dosage of the substance as well as this abnormal amount of neurotransmitters. This is called tolerance.

Being tolerant of a substance means that higher amounts of drugs or alcohol are consumed to experience the same effects of pleasure. In addition, the other areas in the brain responsible for releasing normal amounts of dopamine when a person is engaging in more modest behaviors, are inhibited from doing so.

People who do not have an addiction don’t typically realize or take for granted how much the neurotransmitter dopamine is responsible for allowing us to not only feel pleasure but most importantly, to help us make decisions. When the release of dopamine is disturbed, the ability of a person to make good choices is compromised.

After tolerance comes dependence. A person becomes chemically dependent on their substance of choice and continues to use it to avoid unpleasant physiological symptoms called withdrawal, which occur when the substance is not used for some time. These symptoms include both physical and psychological reactions including, nausea/vomiting, insomnia, muscle pain/weakness, depression, anxiety, hallucinations, etc.

By now, the body and brain have become fully addicted to the substance used, and a person needs it to function normally throughout the day. The only way to combat this cycle of addiction is to receive professional treatment at a rehab facility.

Addiction and Mental Illness: Which One Develops and Gets Treated First?

This is called the chicken and egg debate. As mentioned before, this discusses which condition comes first, depression or addiction? Experts claim that substance use disorders can mask the symptoms of an underlying mental condition.

The Chicken or the Egg Debate:

This chicken or egg debate has been used for a long time to demonstrate the problems with identifying which diagnosis comes first. Medical professionals have been trying to answer this question, but truthfully, every person is different, and therefore, their conditions will be as well.

During therapy, a psychosocial evaluation helps to determine which condition occurred first. However, sometimes a psychosocial assessment may not be conducted as thoroughly.

As a result, this lack of reporting and inadequacies prevents addiction specialists from gaining an accurate understanding of one’s medical history to make an accurate diagnosis  (did mental illness already exist, or was it caused by substance abuse).

You may ask, why is it important to know whether the mental illness first occurred? Someone who has a pre-existing mental condition, such as depression or bipolar disorder, will most likely need extensive treatment.

However, someone whose mental illness has developed from engaging in addictive behaviors will not need the same level of treatment as someone whose depression preceded their substance abuse. Again, everyone is different.

It is important to note that mental illness if left untreated can cause major health complications and death. The risk for relapse is high, and without professional treatment at an inpatient or outpatient rehab facility, the cycle of addiction will continue.

Treatment for dual diagnosis and addiction entails medication management, various types of therapy (individual, group, and family), relapse prevention, and other comprehensive resources. We provide our patients with the coping and life skills to best manage and live with their conditions during and after treatment. Long-lasting recovery and sobriety have always been our goals at Granite Mountain.

You Are Not Alone: We Are Here to Help You Recover