Alcoholism is far more common in our society than anyone can account for. After all… it’s socially acceptable to drink, so why bother getting help through alcoholism treatment?

Well, if you or someone you love is experiencing difficulties with their health, school, job, or relationships due to drinking alcoholic beverages… or if you have trouble controlling the amount you drink once you start… the information disclosed on this page might help determine if it’s a problem.

Having a few drinks (or a lot) may be legal, but both could result in serious injury or death, whether it be an unintentional car accident or respiratory failure from alcohol poisoning.

If you or a loved one may have an addiction to alcohol, treatment for alcohol abuse is the best option for recovery and sobriety. Here at Granite Mountain, we have a variety of addiction treatment programs to choose from, including alcoholism treatment.

Signs, Symptoms, And Effects Of Alcohol

There are various risk factors associated with alcohol addiction, and signs to look out for.

Physical signs of alcohol over-consumption of intoxication include:

Before we continue let’s eliminate a thought you might be having: These aren’t signs that the party has started!

Although from time to time we know the alcoholic might enjoy the occasional illegal activity. Unfortunately, the last thing we need is a little Al Capone running around wreaking havoc. Otherwise, a continuous problem with alcohol could lead to one of the following alcohol-induced disorder(s):

If any of the above induced-disorder(s) hit an unexpected emotional cord, just remember millions of people could say they’ve been there. If at this point you’re ready to find out how to start recovery, we’d first like to affirm the COURAGE it took to read everything up to this point. It’s normal for people to run when they come face to face with their demon(s)… so stay strong.

You Are NOT Alone

We may believe that stopping without any assistance may save us whatever dignity we’ve got left, which is admirable, but could also be life-threatening. Let’s imagine for a second you break your legs while out with friends or family attempting to do a double layout half in, half out flip off a two-story building.

You’re going to accept the help of others. Why?

Because the second you felt the bones in your legs break, you made the realization that maybe you’re not the best person to make decisions for yourself.

Now, not everyone is going to need to admit themselves into treatment or join AA unless you did try doing a double layout half in, half out flip off a two-story building then I strongly suggest looking into that. 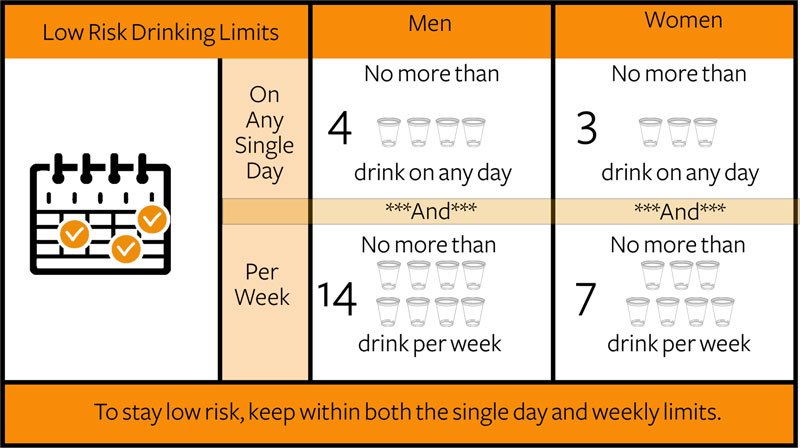 Even within these limits, alcohol can cause problems if people drink too quickly, have health problems, or are older (both men, as well as women over 65, are generally advised to drink no more than 3 drinks on any day or 7 per week).

Based on your health and how alcohol affects you, you may need to drink less or not at all.

When is “Low-risk” Drinking Still Too much?

For healthy adults in general, drinking more than these single-day or weekly limits is considered “at-risk” or “heavy” drinking:

About 1 in 4 people who exceed these limits already have an alcohol use disorder, with the rest being at greater risk for developing these or other problems. Again, individual risks vary. Problems drinking less than these amounts is still possible, particularly if they drink too quickly.

Too much + Too often = Too risky

It makes a difference both how much you drink on any day or how often there is a “heavy drinking day,” that is, more than 4 drinks on any day for men or more than 3 drinks for women.

What Are The Risks?

You may have heard that regular light to moderate drinking can be good for the heart. With heavy or at-risk drinking, however, any potential benefits are outweighed by greater risks, including:

Beyond these physical or mental health risks, frequent heavy drinking also is linked with personal problems, including losing a driver’s license or having relationship troubles.

If you think you need help keep these detox notes in mind. Alcohol detox can be split up into four categories:

Minor alcohol withdrawal symptoms often appear 6 to 12 hours after a person stops drinking. Sometimes a person will still experience a measurable blood alcohol level when symptoms start. These symptoms include:

Between 12 to 24 hours, after they stop drinking, some patients may experience visual, auditory, or tactile hallucinations. These usually end within 48 hours.

Although this condition is called alcoholic hallucinosis, it isn’t the same as the hallucinations associated with DTs. Most patients are aware that the unusual sensations aren’t real.

Withdrawal seizures usually appear between 24 to 48 hours after someone stops drinking, although they could appear as early as 2 hours after drinking stops. The risk of seizures is especially high in patients who have previously undergone multiple detoxifications.

DTs usually begin between 48 to 72 hours after drinking has stopped, Risk factors for DTs include a history of withdrawal seizures or DTs, acute medical illness, abnormal liver function.

Symptoms Of DTs – which usually peak at five days – include:

Measure the Severity of your Withdrawals: To assess the severity of symptoms clinicians typically use the Clinical Institute Withdrawal Assessment of Alcohol, revised scale or CIWA-Ar for short.

Living With Shame And Guilt

Shame is having thoughts or feelings of “I am a bad person”, compared to “I did a bad thing”, which would be considered guilty. Shame is focused on the entire being of a person, while guilt is focused on the behavior.

Guilt allows space for a person to realize they did something wrong, and allows them the power to make amends where needed. When a person is experiencing shame they’re more prone to withdrawing from the situation, feeling they lack empowerment.

Living with shame and guilt can be very debilitating and limiting to an individual.

Treatment For Alcoholism: Tools To Help Towards Recovery

Compare Your Drinking to the U.S Average

A major nationwide survey of 43,000 U.S. adults by the National Institutes of Health shows that only about 2 in 100 people who drink within both the single-day or weekly limits below are diagnosed with an alcohol use disorder.

One of the most powerful tools for recovery is a tool you already possess. It’s you! That may sound cliche, but let’s be real—a gust of wind isn’t going to blow by then all of a sudden you’re no longer affected by cravings for alcohol. It’s going to take a much more powerful force to do that. The force I speak of isn’t God although it could be if you decide to make that choice for yourself. What I’m talking about is the power of vulnerability popularized by Brene Brown a shame as well as vulnerability researcher at the University of Texas. You can watch her TedTalks below or scroll to the next tool. That’s up to you.

If you’re not quite ready for what Brené Brown discusses then try an exercise referenced from Kristin Neff’s book Self-Compassion that she wrote based on her research at the University of Texas.

How do you typically act towards yourself in difficult times?

The next time you find yourself in the grip of negative emotions, try generating some positive emotions to go alongside them.

You can use the following phrases when you’re stuck in negativity to validate your feelings while also focusing on your desire to be happy:

The first phrase compassionately acknowledges the difficulty of having negative emotions. The second phrase is a reminder that negative emotions are a normal, natural part of being human, which shouldn’t be judged. The third phase helps you get in touch with your desire to be happy.

Try keeping a daily self-compassion record for one week (or as long as you like). Journaling is an effective way to express emotions that have been found to enhance both mental and physical well-being. At some point during the evening when you have a few quiet moments, review the day’s events. In a journal, write down anything that you felt down about, anything you judged yourself for, or any painful experience. (For instance, maybe you got angry at a waitress at lunch because she took forever to bring the check. You made a rude comment then stormed off without leaving a tip. Afterward, you felt ashamed and embarrassed.) For each event, use mindfulness, a sense of common humanity, and kindness to process the event in a self-compassionate way.

Treatment For Alcoholism At Granite Mountain

You can also receive treatment for alcoholism in one of our programs at Granite Mountain from us directly by a dedicated team of specialists.

Some of the treatment programs for alcohol abuse offered here include:

Often, when someone develops alcohol dependency, they end up damaging relationships by lying, stealing, or engaging in other behaviors that take a toll on trust.

As a result, there is often lingering guilt and shame, as well as lingering resentment and distrust from those who have been hurt.

At Granite Mountain Behavioral Healthcare, we help those who are struggling with alcohol use disorder receive treatment for alcoholism. We utilize tools and resources, not only to help people quit drinking but also by teaching them how to develop coping mechanisms to overcome the strong desire to use again, allowing them to build stronger healthy relationships.

Overcoming alcohol addiction IS possible when you have a team behind you that’s supportive.

Do something your alcoholic self may not approve of by giving us a call… and simply find out more.

If you’d like to hop on a call… just to get some solid advice on the next steps & to answer any questions you may have… or to find out if your insurance will cover treatment… please feel free to call us directly at (928) 756-0694.