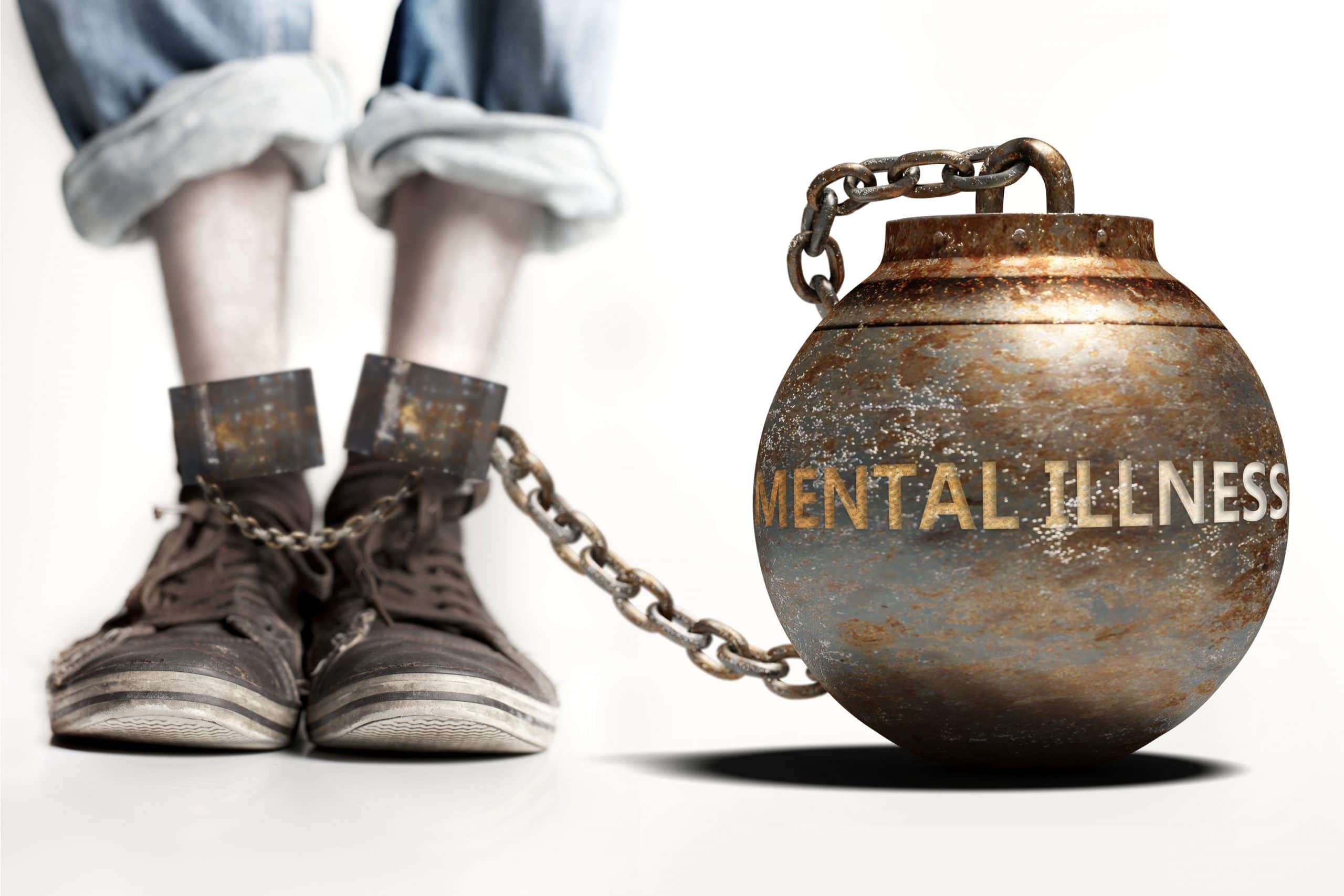 Today, mental health and substance use disorders called co-occurring disorders or dual diagnosis has become a large topic of conversation nationwide. The most common mental disorders include the following:

The concern is, most Americans don’t treat people who have a mental illness in the same way as other people who are suffering from other chronic conditions.

A large part of society is quick to judge people who have a mental illness, often causing alienation and discrimination. Also, oftentimes, people reject the fact that addiction is a brain disease that can be treated and managed.

Anyone who has had experienced mental illness firsthand, either personally or professionally, can tell you that despite the attempt to clear up misconceptions, along with the advances in psychiatry and psychology, there still is a great deal of stigma that remains.

The Stigma of Mental Illness

Many people believe that addiction is a result of immoral behavior and that people with substance use disorders just choose to continue using drugs or drinking. While there is some truth to that, unlike people with other chronic conditions such as arthritis, those with addiction and mental illness are blamed or criticized in many ways for having these problems.

Unfortunately, negative attitudes and beliefs toward people who have a mental health condition are extremely common. According to the Better Health Channel, Stigma is defined as when someone views a person with mental illness in a negative way. This negative perception often leads to discrimination, where people with mental disorders are treated poorly because of their condition.

In other words, mental health stigma occurs when a person defines someone by their illness rather than who they are as a person. For example, one may be labeled psychotic or a schizo rather than the person experiencing psychosis or symptoms of schizophrenia.

Becoming dependent and addicted to drugs and alcohol can happen to anyone. It is not a matter of willpower or lack of morals, it’s a choice that results in consequences. Addiction is a disease that doesn’t discriminate, and neither does mental illness.

The history of stigma surrounding mental illness has dated back to the Neolithic times, about 12,000 years ago (10,000–4,500 BC). People’s ideologies of the treatment of mental illness have not always made scientific sense.

One of the most common treatments conducted around that time was known to be brutal and inhumane. For those believed to have mental illness or spirits, a hole would be chipped in their heads, as it was thought to release the evil spirits and cure them of disease.

Today, mental illness stigma is very prevalent, but, treatment methods used to manage co-occurring disorders are taken very seriously and are backed up by years of evidence-based research.

The World Health Organization (WHO) reports that approximately, 450 million people worldwide suffer from a mental disorder, making them among the leading causes of disability. One in four people will be affected by mental illnesses or neurological disorders at some point in their lives. Mental health stigma is extremely prevalent, as there is a major lack of understanding surrounding these types of illnesses.

When there is some sort of little to no understanding, there is neglect. Mental health stigma prevents two-thirds of people from getting the help they truly need. For those with mental illness and addiction, mental disorders are often the part that is left undiagnosed, which is not only dangerous, but can result in severe complications, including coma, overdose, or death.

Doctor Harlem Gro Harlem Brundtland, Director-General of WHO stated that “Mental illness is not a personal failure. In fact, if there is a failure, it is to be found in the way we have responded to people with mental and brain disorders.”

Mental health and addiction specialists have been making major strides in bettering the way they are diagnosing mental illness. Technological advances in medicine have allowed for more accurate diagnoses, allowing people to get the help that they need to effectively manage and cope with their condition, in order to properly recover.

Assumptions surrounding mental illness only cause turmoil, creating a stigma defined by shame, guilt, and fear. Thus, most importantly, the fear and guilt of having a mental disorder continue to prevent millions of people from seeking the proper treatment that they need to recover and become sober.

Stigma can also be described as a label that associates a person to a set of unwanted characteristics that form a stereotype. These include the following:

There are common stereotypes and kinds of mental stigma, which result in discriminatory behaviors. They include:

The stigma associated with mental illness can be divided into 6 types which are commonly defined by perceptions and internalization, both of which are very real.

Public stigma refers to a set of negative attitudes and beliefs that motivate individuals to discriminate against people with mental illness.

Social stigmas are commonly related to people’s culture, gender, race, intelligence, and health. Society tends to place people into specific categories and groups based on certain characteristics, differences, and similarities. These are defined as the prejudiced attitudes that others have around mental illness. When someone has a mental illness they often feel not part of a group, and as a result, feel alienated or discriminated against by society.

A person with a mental health diagnosis becomes aware of the public stigma placed on them, which in turn, the mind is persuaded to internalize these stereotypes, causing one to agree and believe them.

People who engage in label avoidance refrain from associating with individuals and/or facilities that may place them in a group surrounded by stigma. (i.e. mental health providers and treatment facilities/rehab).

When the family and friends of people who have a mental health problem are also discriminated against because they are associated with them.

The effects of all these different types of stigma surrounding mental health play a huge role in how people with mental illnesses are perceived, but most importantly, how they perceive themselves.

The effects that stigma has on people suffering from mental illness and addiction and their friends and family are harmful and extensive. Stigma means one has a lack of understanding, which can make a person feel invalidated, isolated, and shameful.

Mental illness stigmas can also lead to discrimination, harassment, violence, and bullying. Lastly, as mentioned before, stigma prevents people from seeking help and receiving treatment, which as a result, their symptoms worsen, and become more difficult to treat.

There are a variety of causes of mental health stigma. Everyone’s situation with mental illness or co-occurring disorders, meaning addiction as well as mental health, is unique. Therefore, the causes of each person’s stigma will not always be the same as another individual. The main root or source of one’s mental stigmas include:

How To Cope With Mental Health Stigma

While reaching out for help is encouraged, those with co-occurring disorders, especially the mental health side of it, often feel like they can’t ask for help, because they feel ostracized, ashamed, embarrassed, fearful, etc.

The power of stigma reaches a whole new level when people have mental illness and substance use disorder. Treatment for co-occurring disorders is neither short-term nor straightforward. It depends on the individual and treatment administered.

These mental illness stigmas make it extremely difficult, as stigma and the discrimination that occurs as a result, do not begin with a request for help, but otherwise is perceived that help is not obtainable or unavailable to them.

The toughest thing about sobriety is taking that first step, but, Granite Mountain Behavioral Healthcare is here to tell people that help is available and managing/treating dual diagnosis is possible.

In general, people can help challenge stigma by speaking up when you hear others around you make negative or wrong comments about mental illness. If you have a mental illness, know that you are definitely not alone.

We offer educational and supportive resources for people and families affected by mental illness and addiction. It is important to receive treatment to reduce symptoms and have a better quality of life.

At Granite Mountain, our team of highly-qualified addiction specialists prides ourselves in helping our clients learn how to cope with their conditions and the stigma that surrounds mental illness. Tips for coping include the following: