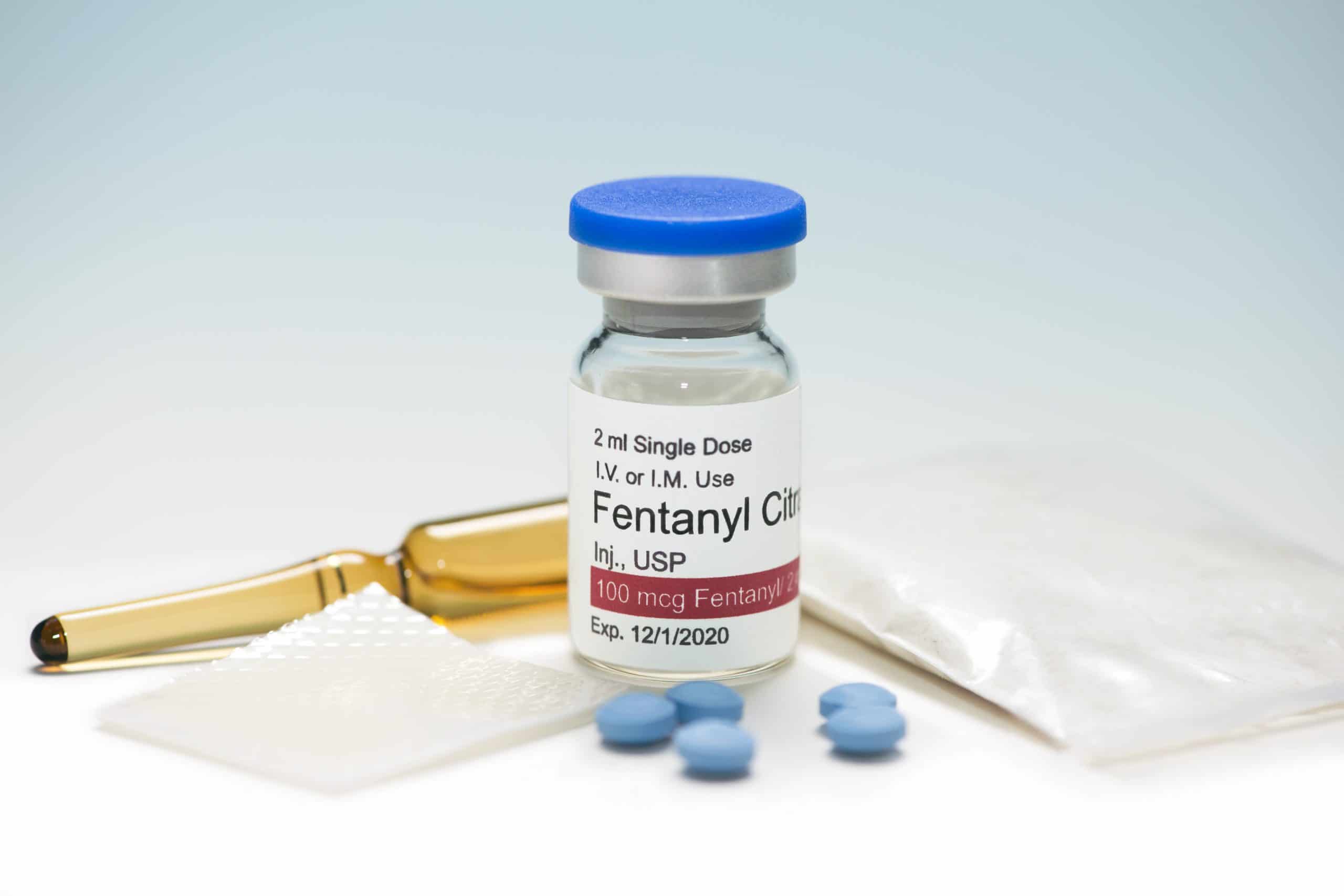 Fentanyl drug overdose rates are at an all-time high across the country but more so in Arizona. Arizona is fighting a war on “Mexican Blue Oxy” Oxycodone laced with fentanyl. While the government is looking for ways to stop the flow of the drug into their state, families are seeking ways to help their loved ones before the horrible drug destroys them.

Fentanyl is a synthetic schedule 2 narcotic analgesic that is 50 to 100 times stronger than morphine and 30 to 50 times more potent than heroin. Fentanyl works by blocking pain receptors in the brain and increases the production of dopamine, which increases the feelings of happiness, relaxation and decreases the perception of suffering. Fentanyl is prescribed for severe pain, after surgery and for chronic pain patients who are no longer finding relief with other opioids. In 2017, In 2017, Arizona providers wrote 61.2 opioid prescriptions for every 100 people.

Fentanyl Addiction: Why is Fentanyl so Addictive?

Many people become addicted to fentanyl very quickly due to its euphoric “high” similar to heroin. Fentanyl enters the bloodstream and immediately crosses the blood-brain barrier, where it quickly binds with opioid receptors. The quicker the binding process, the stronger the feeling of euphoria, which makes fentanyl the most dangerous opioid. Compared to other opioids, it takes a very small amount of fentanyl to produce the same effects,

Fentanyl affects everyone differently. The effects are dependent on an individual’s size, weight, the overall state of health, the amount that is taken, whether fentanyl is taken in combination with other drugs, and whether the person is used to taking opioids.

Fentanyl analogs produced in illegal laboratories can be hundreds of times stronger than street heroin and tend to produce significantly more respiratory depression, making them even more dangerous to users than heroin.

Individuals using heroin or cocaine, or in recovery for a drug use disorder may not know that the potency of street-sold heroin and cocaine can be greatly enhanced by adding fentanyl. Because the potency of such drugs is not known, and they are not told about the addition of fentanyl, any illicit drug use – even a reduced dose – can result in an accidental overdose or death. In many cases, drug dealers are mixing fentanyl with other drugs, like cocaine, heroin, methamphetamine, and MDMA. This is because it takes a very small amount to produce a high with fentanyl, making it a less expensive option.

Fentanyl may be taken orally, smoked, snorted, or injected, and no one method of use is safer than another.

Fentanyl Addiction: The Signs of an Addict

The abuse of and addiction to fentanyl or a synthetic form of fentanyl may be shown by the following signs and symptoms:

People addicted to fentanyl who stop using it can have extreme withdrawal symptoms that begin as early as a few hours after the drug was last taken. These symptoms include:

Fentanyl Addiction: The Numbers In Arizona Are Alarming

Data from one report showed that in 2018, fentanyl was reported in 18 percent of all fatal and non-fatal reported overdoses in Arizona. Since Governor Doug Ducey’s opioid emergency declaration in 2017, fentanyl is the most commonly reported drug involved in fatal overdoses with 301 deaths since June 2017.

The most recent data about overdoses in Arizona shows that:

Fentanyl deaths have surpassed those of heroin and have affected all Arizona demographics. Residents say it is the worst kind of drug invasion seen in the last 30 years. For example, according to the DEA in Arizona, in 2017, its agents seized 172 pounds of powdered fentanyl. In 2018, they confiscated a total of 445 pounds, pointing to a 159 percent increase.

In 2017, DEA agents had also confiscated over 95,000 pills of fentanyl-laced pills. This amount increased in 2018 to 379,000, which translates to an almost 300 percent increase. So far, in 2019, 1,138,288 illegally manufactured fentanyl pills have been seized. Such a significant increase in illegally created fentanyl shows that war on fentanyl deaths is far from over

Fentanyl Addiction: What is Arizona doing to combat the Issue

In June 2017, Governor Doug Ducey declared a statewide emergency after data was released on the increased number of opioid overdoses primarily from fentanyl.

On January 25, 2018, Governor Doug Ducey signed the Arizona Opioid Epidemic Act. The Act includes measures to cut down on doctor shopping by making it mandatory for doctors and pharmacies to keep databases up to date. The state has also started placing safe disposal bins for all opioids and other prescriptions. There is a limit on the first fills of 5 days. Research shows that any more than 5 days of continuous use leads to a higher risk of addiction.

Since June 2017, the Arizona Department of Health has trained over 1200 first responders to carry and administer Naloxone and has provided over 5100 new Nexalone kits to law enforcement agencies.

Other measures call for $10 million to be spent treating opioid abusers who are underinsured and ineligible for Medicaid. The Good Samaritan Law protects anyone who is overdosing and anyone who witnesses an overdose from prosecution for seeking help. The governor has also implemented the Angel Initiative. It will help individuals struggling with fentanyl addiction, and other opioid addictions seek treatment without prosecution. Meaning that an addict can walk into any police station, turn in their drugs, and ask for help without the fear of going to jail. It also helps parents who seek treatment place their children into care without the children going into foster care.

Ducey called the package a comprehensive model for other states looking to address what has become a nationwide crisis.

As the war on fentanyl and fentanyl addiction continue, the destruction of Arizona families is on the rise. There has been an increase in the number of babies being born with a fentanyl addiction, in 2008 there was 1.8 in 1000 hospital births up in 2019 to over 10 cases in every 1000 hospital births. And babies born with a fentanyl addiction suffer lifelong issues. Opioid use during pregnancy has also been associated with developmental delays and intellectual impairment. But most studies were conducted before the use of synthetic fentanyl, and scientists don’t yet know the long-term implications of these substances on babies but are certain that we will see complications that will have devastating effects during their life.

Fentanyl addiction takes over the life of the victim it has claimed. They give up important life activities, such as work, family time, hobbies they once loved. Fentanyl takes over their life; they spend most of their day using fentanyl, looking for fentanyl or finding ways to get money from people to support their fentanyl addiction. Fentanyl becomes such an important part of the addict’s life; they will say and do anything to get the money to support their habit.

If someone you love has a fentanyl addiction, you are likely to experience changes in your thoughts and behaviors. You may find yourself:

Fentanyl Addiction: How To Get Help

If you have a family member who has a fentanyl addiction, it is a battle of keeping the peace or starting a war of uncertainty. Keeping the peace means not talking to your loved one about their problem, but that comes at the cost of watching them destroy their life. Starting a war of uncertainty means putting it all on the line and giving them no choice.

There is no perfect way to approach someone with a fentanyl addiction to getting help. By the time you get up the courage to fight the battle and talk with your loved one, you already feel defeated by the day to day battle. You are not alone in this war on fentanyl. Families all across Arizona are in this war. Like you, they feel defeated.

Let the caring and compassionate family of Granite Mountain Behavioral HealthCare help you or your loved ones. You contact us here.