For decades, we’ve been trying to find ways to consume alcohol without gaining the adverse alcohol effects has on your muscles. But does working out and gaining muscle mean that alcohol consumption must be eliminated?

Many adults enjoy catching a happy hour or going out to get a drink, particularly on weekends, but alcohol and muscle recovery usually don’t mix. The workweek’s middle or end is traditionally commemorated with a happy hour that generally lasts more than only one hour. But the truth is, working adults and athletes both struggle to eliminate even casual drinking on weekends only.

Some look for ways to balance consuming alcohol and athletics; others give into the fun that comes with partying, causing them to seek an alcohol recovery program.

How Does Alcohol Have An Effect On Your Muscles?

Research has shown that alcohol has a major effect on your muscles. This is due to the impairment of muscle protein synthesis (MPS) by absorbing the body’s optimal nutrition. The experiment included athletes binge drinking large amounts of alcohol. Because athletes are most prone to requiring muscle but are often drinking, the studies had shown an even greater decline in MPS with a more significant amount of alcohol consumption.

The research provided enough data to propose educational awareness to coaches and athletes about alcohol and muscle recovery.

Alcohol and Effects on Fat Burning

Alcohol consumption has been proven to decrease metabolism and reduce our fat-burning capability. This is partly because of how the human body reacts differently to alcohol than consuming real food. The body treats alcohol like a toxin, not a nutrient, so it’s impossible to store alcohol calories the way the body holds food calories.

You’ll almost immediately notice the urge to use the bathroom after consuming just two drinks. Your body is tentatively converting the unwanted byproducts as fuel to release the toxins. This slows down the natural metabolic process of fat stored being burned or adipose tissue. Research has determined that alcohol substitutes fat for fuel and supplies many daily requirement calories.

So, you’re out enjoying a few drinks, the metabolism has paused its fat-burning capabilities, and it starts to break down the booze first. This causes the food consumption calories to be stored as fat. From there, the alcohol decreases our ability to burn fat, especially around the belly area, creating the ever so popular “beer belly.”

Long-term experiments have also reported that older women who consume alcohol moderately gained less weight than women who had eliminated alcohol. It was stated these women had consumed alcohol occasionally; and on those days, they were physically active and took in fewer calories.

So, does this mean you can’t work out and enjoy a relaxing glass of wine before dinner? Luckily, research has shown that moderate drinking can be advantageous to our health.

Alcohol and Its Effects on Fitness 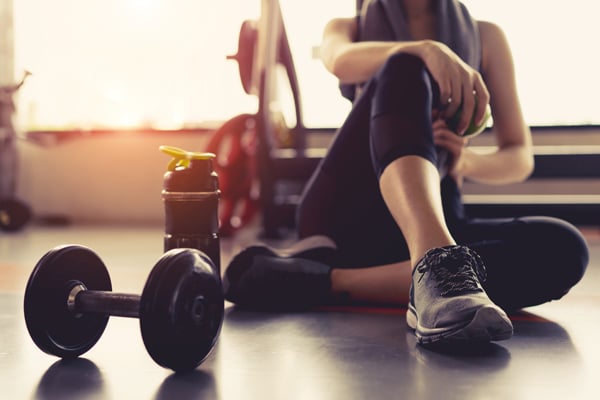 It has also been revealed that alcohol negatively modifies hormone levels and decreases the body’s metabolism, meaning the capability to decrease body fat becomes delayed. There’s also the problem for some who just can’t drink alcohol in moderation.

How Much Should I Drink?

Health experts advise that women only have only one alcoholic drink per day and for men, no more than two. Simply enjoying a drink has become a reward and cheat option for completing a goal or solid workout and may turn into consuming more than two.

But not all is bad with alcohol consumption; analysis has also revealed some positive health advantages associated with consuming alcohol moderately, like increasing the good cholesterol levels (HDL), reducing stress, and insulin resistance. But overall it has been proven, the negatives of alcohol consumption exceed the positives.

It boils down to making the best-informed choice about alcohol consumption and your fitness goals regarding alcohol’s effects on muscles.

Alcohol consumption can cause lowered inhibitions, leading to mindless eating, overeating, and consuming too many calories. Research has shown that when under the influence of alcohol, drinkers cannot stay focused on healthy eating.

Alcohol consumption and eating bad go hand in hand, and the result is usually a lack of energy and an enlarged waistline. Studies on calorie intake and alcohol consumption showed people who enjoyed a glass of wine at lunch were consuming an additional 200 calories daily. Those extra calories over time had caused immense weight gain for most participating members.

How many calories are in each type of drink?

There seems to be inconclusive data on alcohol’s effects on testosterone levels. Research has indicated someone would have to consume quite a lot of alcohol consistently to alter testosterone.

According to some studies, roughly nine drinks consumed for a man weighing 180lb can lower post-exercise testosterone hormone levels. Reduced testosterone in men can decrease libido, diminish muscle growth, and enhance the risk of osteoporosis.

So, does this suggest that men shouldn’t consume alcohol if they want to preserve their manhood? Research states that heavy or excessive binge drinking can cause health problems, whereas drinking in moderation doesn’t negatively affect lean mass gains or male reproduction.

An examination was conducted on the effects of alcohol consumption with MPS. Participants in the analysis were eight physically active males performing interval training and weight lifting as a portion of the testing method. They drank alcohol and whey protein instantly after their exercise and once again four hours afterward.

The men also consumed a meal full of carbs two hours after training, with the muscle biopsies taken at rest, two & eight hours after the workout.

The results determined that alcohol levels had elevated above baseline post-exercise with both carbs and protein consumption. Muscle biopsies showed decreased measures of MPS following physical exercise. Alcohol consumed with a protein had reduced MPS by 24% and then 37% when coupled with carbs. The result revealed a partial release of MPS when alcohol was consumed with protein but still negatively diminished.

Consuming alcohol indicates you’re drinking empty calories that have zero of the body’s nutritional value. Healthy carbohydrates will have seven calories per gram as opposed to four calories per gram. Many alcoholic beverages are blended with mixers full of dyes and sugar, producing more unhealthy calories for the body.

Researches have shown that excessive and binge drinking can block the body from absorbing a sufficient amount of protein and additional nutrients. Humans require adequate nutrients to perform optimal fitness exercises while building and maintaining muscle mass.

Alcohol may give the feeling of being relaxed, but it has been proven to negatively affect and disrupt our sleep. Sleep is vital for tissue repair and recovering muscles. Without a sufficient amount of sleep, we become unable to function at maximum levels. Alcohol is a depressant substance and may help you fall asleep, but remaining asleep usually becomes an issue.

Research has revealed that alcohol consumption can disrupt our restorative or rapid eye movement (REM) rest. When going without REM rest, you could experience daytime drowsiness, exhaustion, and weak concentration.

Implications state that modest alcohol consumption, meaning one-two drinks, will not disrupt or diminish our sleep patterns. Disrupted sleep can happen with excessive or binge drinking. It’s also highly recommended not to consume alcohol as a sleep aid to circumvent the danger of alcoholism.

Is Alcohol Worth Sacrificing Your Fitness Goals?

Implementing the standard suggested guidelines of consuming no more than one alcoholic beverage for women and two for men should not affect fitness levels and muscle growth. Boozing too much, though, is extremely unhealthy and dangerous.

Becoming in shape and growing muscle does not imply eliminating alcohol; it only means you should continuously make healthy choices. As alcohol affects your muscles, this makes burning fat and building lean mass more challenging, and superior nutrient intake is crucial. And now that we know alcohol has zero nutrient value, consuming a drink or two occasionally and moderately seems to be possible.

You might not overwhelm yourself with optimal fitness gains, but restricting your alcohol consumption intake is crucial to avoiding alcoholism and living a healthy, happy life.

If you or a loved one is suffering from alcoholism, we can help. Here at Granite Mountain Behavioral Healthcare, we understand that treating someone with an alcohol addiction takes time and hands-on care. We now understand alcohol’s effects on muscles and other vital organs, but the real damage is when a disorder takes over a life.

Do not hesitate any longer; contact us today and allow our team of specialists to help get you back on track to a healthy, happy lifestyle!